In cooperation with the innovation laboratory of the internationally operating manufacturer of sanitary products Hansgrohe SE, the need and market potential of a new type of dog shower was explored.

The project was characterized by the international focus and the staggered nature of the research design: In the first step, a research study was conducted with the aim of analyzing the target group and exploring demand (pricing, product features and others) in the USA as a potential main market. In the second and final step, different product claims of the dog shower were validated in Germany - another targeted market - based on the findings from the first research study in order to be able to use one effectively in marketing.

Implementation of the Study:

The purpose of the preliminary study conducted in the USA was to obtain an overview of attitudes and opinions about the developed dog shower in the US market. This information was to be used for future marketing strategies, advertising and product improvements. For this purpose, 1,000 respondents were interviewed using an online survey, taking into account gender, age, regional distribution, and relationship status.

With the help of the subsequent study part, the claims found in the preliminary study were validated. The test period of the main study extended over two months and - after initial recording of the status quo - included three measurement points (=three washings) with a final survey on the approval of the proposed claims.

Test persons were selected using a special recruitment matrix that included certain parameters such as gender distribution, age, household size as well as dog size, top coat length or dog breed. Those people were sent a test product of the dog shower, with which they had to perform the washing procedures. 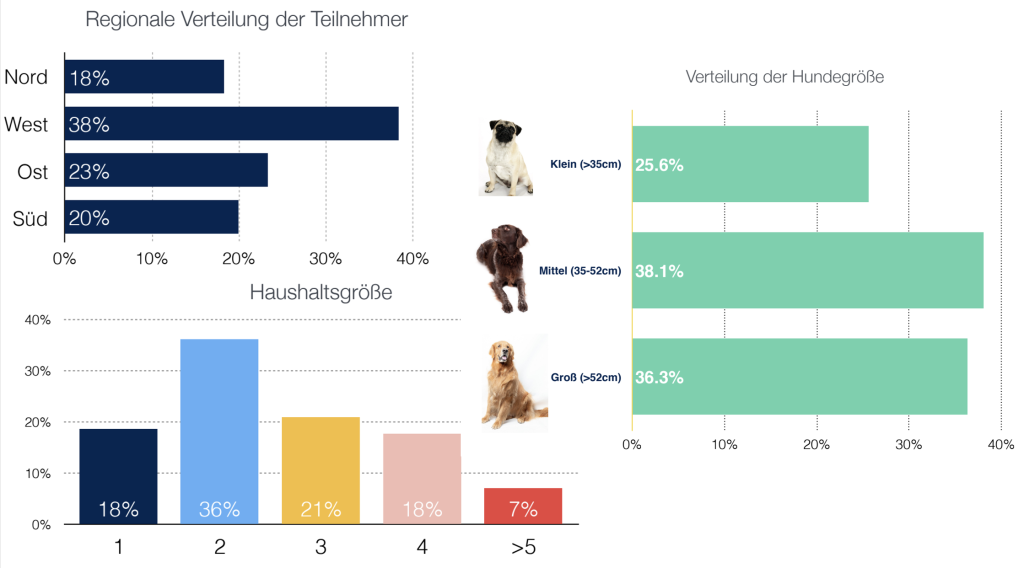 Color: In terms of product features, the testers were also asked about their preferences regarding the color selection of the product. It was found that blue was the most popular color, followed by black, white, and pink. The least popular color was gray. 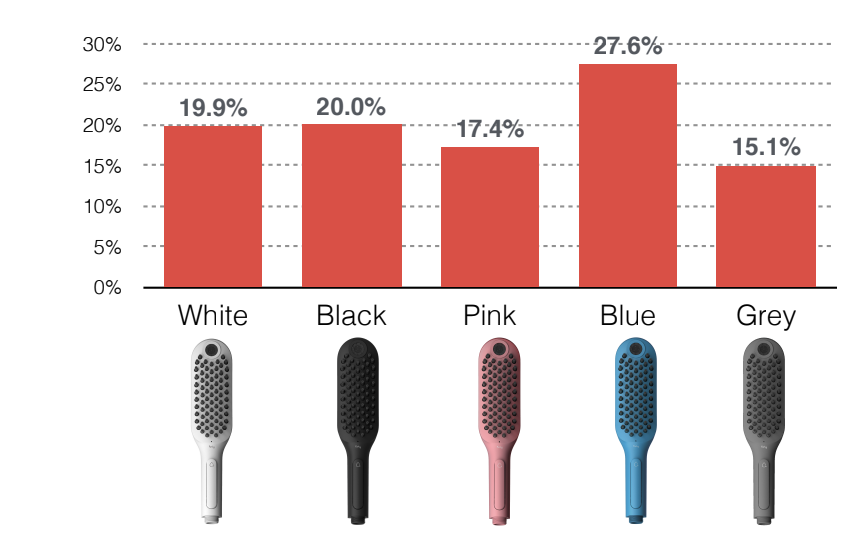 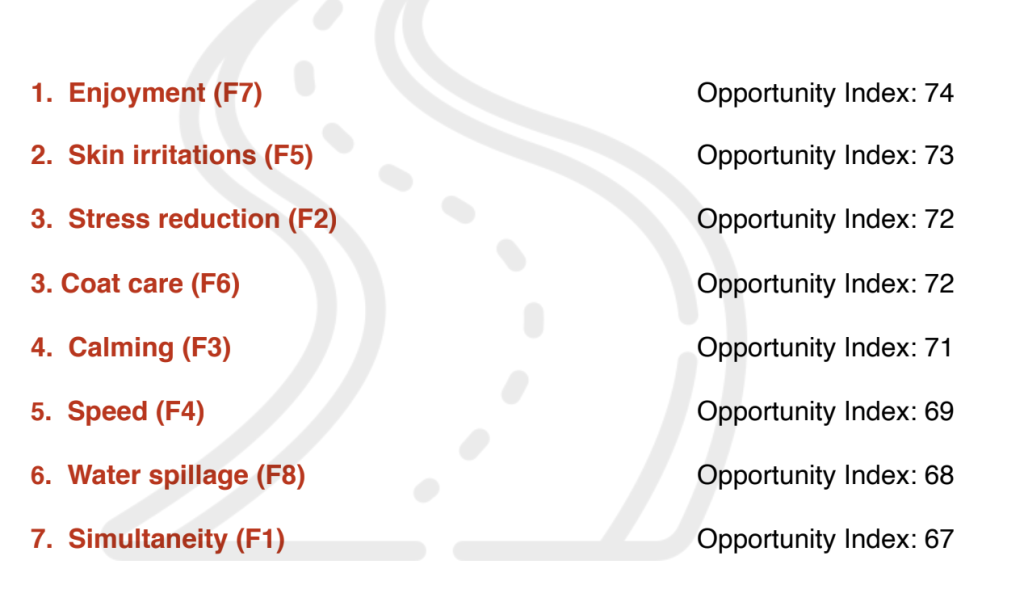 The figure represents the top 5 claims in terms of agreement of the testers. 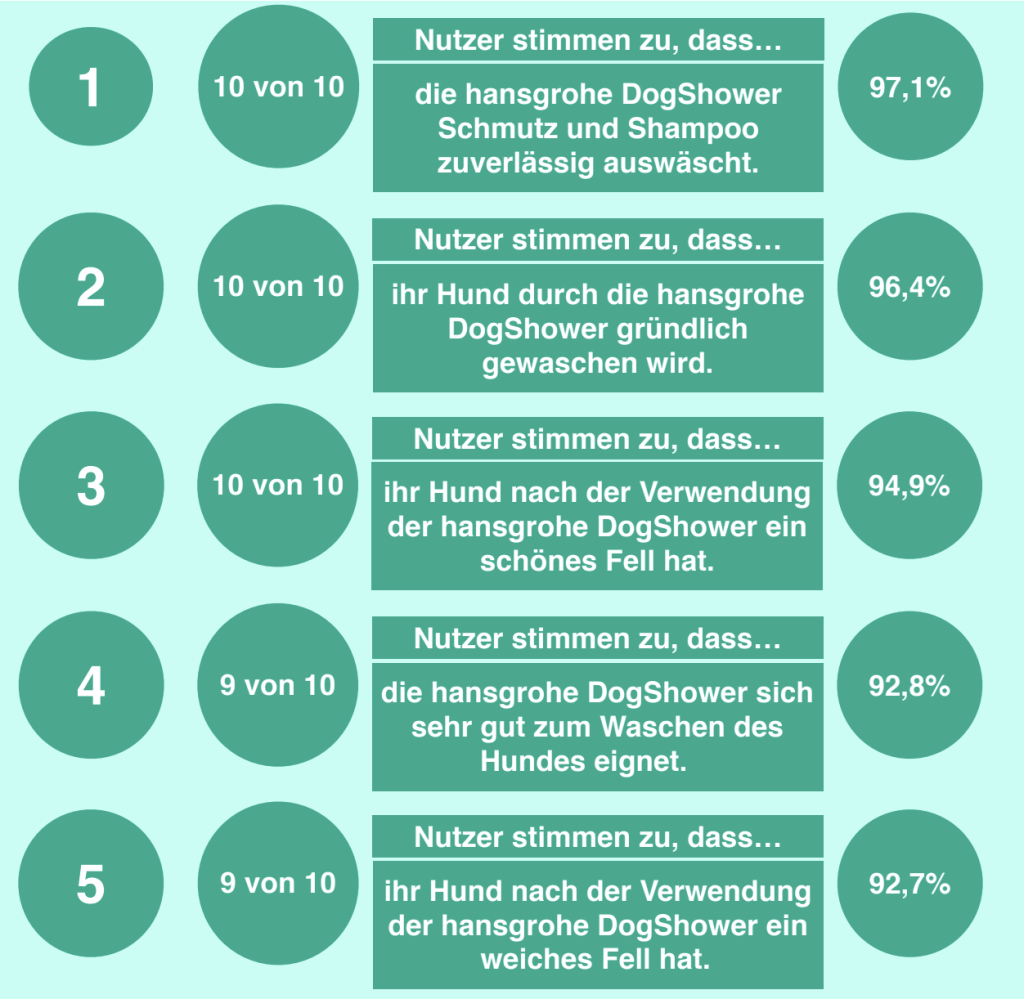 The fun factor of using the dog shower was extraordinarily high among the testers (the dogs and their owners) and increased even more during the test period. The highest average agreement to the fun with the dog shower is reached with the third measurement: 9 of 10 tester pairs make the use here fun! The question of how much the dogs enjoyed washing with the canine shower was also answered as part of the study, reaching highs towards the end of the test period.

While at the first use the approval value for the enjoyment of the dogs amounts to scarcely 59%, with the third use already an approval value of 70% is reached. This underlines the gradual habituation of the dogs and their owners to the shower spray.

The results confirm the benefits and high potential of the dog shower. The product fulfills the wishes and needs of the target group for an easy-to-use shower for the dog that is also fun for the pet, gentle on skin and fur, and provides a pleasant experience for both. The study showed the potential for improvement that the product can show with repeated use and thus, how the target group learns to value the product.

Through the successful cooperation with the hansgrohe InnoLab, a new product was identified that was developed with the market and target group in mind, and this was predicted to have a high level of acceptance and readiness for use. The product was very well received by all dog lovers and the studies provided the customer with important insights into the user behavior and emotional involvement of the users as well as findings for marketing and establishing the product.